What Is The Metaverse And What Does It Mean For Retail?

Everything you wanted to know but too scared to Google.

A term first coined by Neal Stephenson in his 1992 dystopian sci-fi novel, Snow Crash.  What does the metaverse look like in modern society, and why is everyone talking about it?

In less than five minutes, we give you all the information you need to know in digestible terms and then outline the early adopters in this space.

Want regularly updated news from brands entering the metaverse? Reach out to get access to our world-class Retail Reports for inspiration and to keep up-to-date with your competitors.

This article was originally published on December 12, 2021.

The Beginners Guide To The Metaverse

What is the metaverse?
The metaverse takes a 2D screen and turns it into a 3D digital environment through a combination of augmented reality (AR), virtual reality (VR) and video. People can then carry out daily tasks, such as working or socializing, like avatars in a digital world.

Does one company own the metaverse?
No, think of the metaverse as more of a concept. As a way of coining the term and trying to become a leader in the space, Facebook recently rebranded to Meta.

What is the difference between virtual reality (VR) and augmented reality (AR)?
An immersive experience, VR is a three-dimensional, computer-generated environment that users can discover by wearing a headset or glasses. AR is a digital overlay that gets projected onto the real world and is brought to life on your digital screen. For example, through filters on your phone. 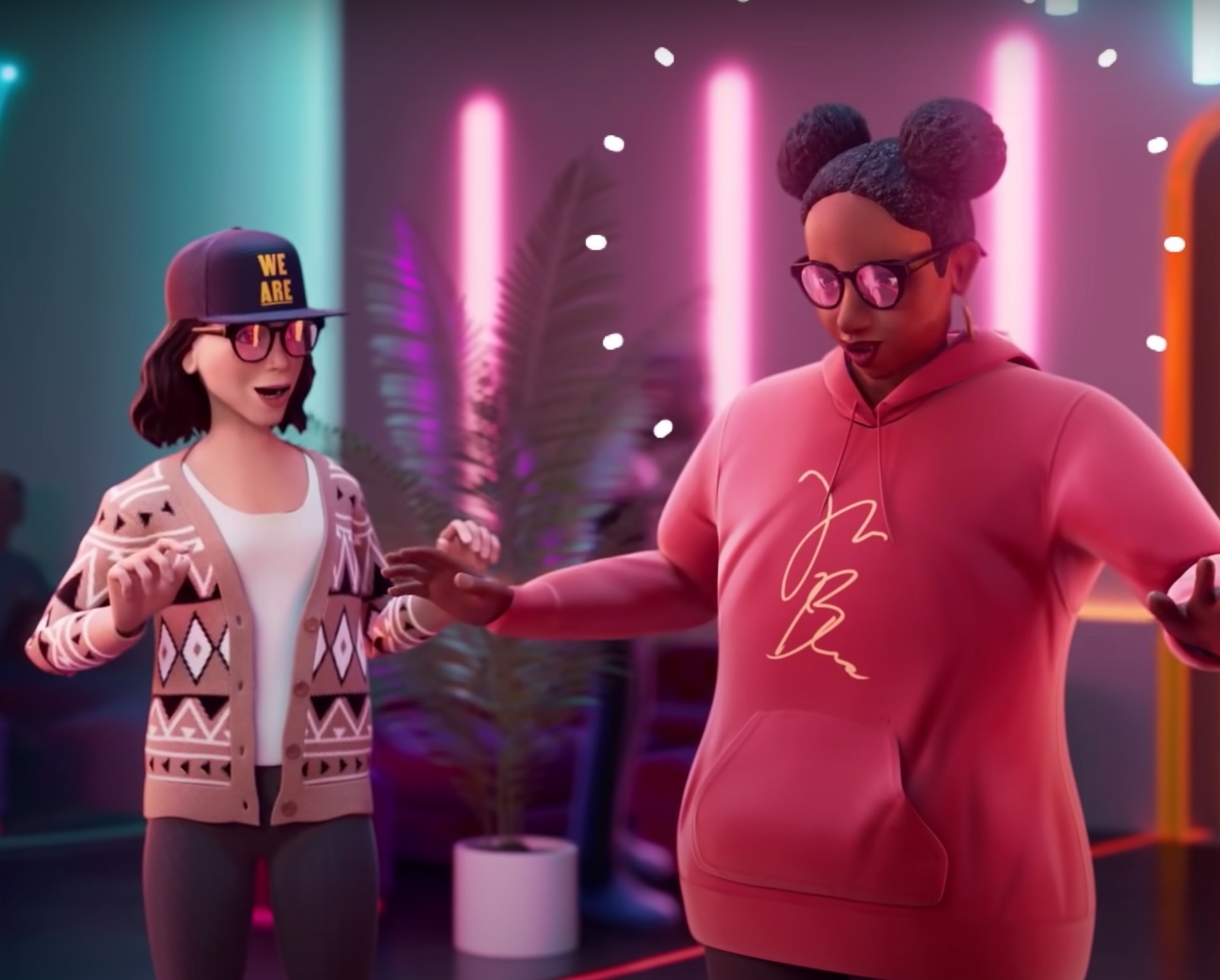 In collaboration with the Institute of Digital Fashion and Clearpay, the brand has released an NFT of the designer's final look at LFW. The virtual replica will be available to try on via Instagram filter, and will be the first NFT to be sold on a luxury site in pounds versus cryptocurrency.

The Pac Mall Rats series launched with three non-fungible tokens, each representing the brand's LA retail spaces, available for auction on Open Sea with bids starting at $200. Each buyer will receive a physical clothing item that depicts the purchased NFT. Over time, the retailer plans to launch a further 300 unique NFTs.

Its first NFTs with adidas, Project Re-source invites its collective following to co-create a large-scale digital artwork. The NFT will be auctioned on the digital art marketplace SuperRare and displayed in flagship stores. The luxury brand is also partnered with French gaming company Ubisoft on its popular winter sports game to dress characters and offer branded sports gear. Players can outfit their characters in Prada's Linea Rossa sportswear line, made especially for the game.

The luxury brand has collaborated with the virtual creator on Supergucci, a limited series of CryptoJanky NFTs and ceramic sculptures. Gucci also bought a plot of land on virtual real estate platform, The Sandbox. The project will sit under the brand's Gucci Vault concept that houses all of its metaverse projects.

Releasing its first NFTs with Frank Ape's artist Sines, Gap Inc's limited edition release is available in four different categories: "Common," "Rare," "Epic" and "One of a Kind." Fans collecting the brand's hoodie digital art at Common and Rare levels have the opportunity to purchase limited-edition digital art by Frank Ape, and a physical Gap x Frank Ape hoodie made from recycled materials. 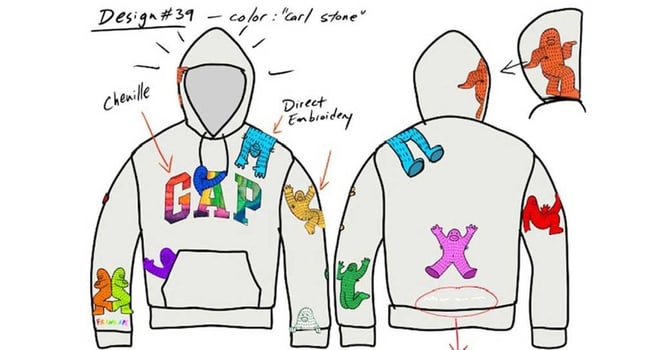 Titled Into the Metaverse, adidas launched its first NFT collection as a mix of digital and physical pieces produced with collaborators Bored Ape Yacht Club, Punks Comic and gmoney. Costing 0.2 Ethereum (approximately $765), the drop made $23mn in minutes after launch. Digital items are usable within the Ethereum-based metaverse game The Sandbox, where adidas has also acquired a plot of virtual land that it plans to fill with "exclusive content and experiences." 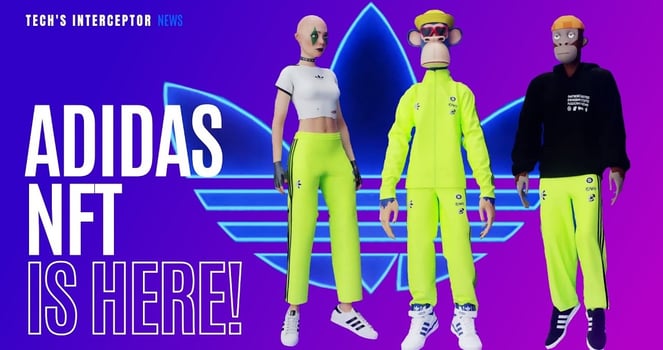 Until January 3rd, users can browse and try on gender-neutral digital clothing in virtual Polo Shops on Roblox. Ranging from 150 to 200 Robux coins, the limited-edition items allow users to customize their avatar. Visitors can also interact socially within the world and enjoy ice skating, drinking hot chocolate and roasting marshmallows. In addition, gamers can unlock various accessories via a treasure hunt, while bonus items drop every week.

Alongside the launch of the physical AZ Collection in collaboration with the South Korean label Ader Error, users can also purchase digital versions for their avatars in the metaverse on the ZEPETO platform. 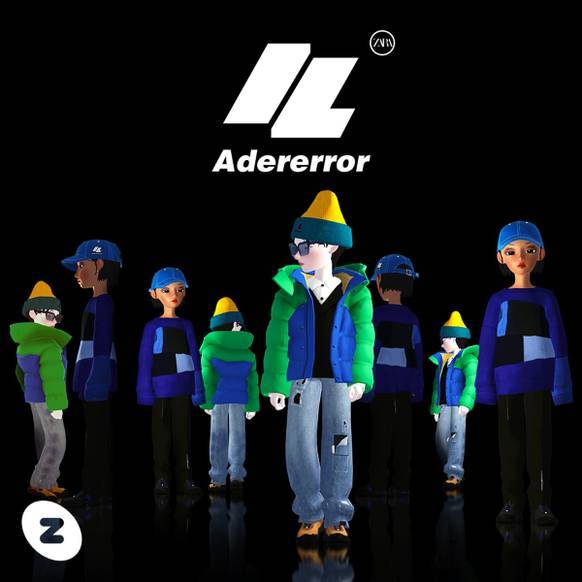 The London Central Saint Martins' graduate has partnered with EA video game, The Sims, to create a 23-piece Modern Menswear pack that players can buy for £4.99 for virtual use. 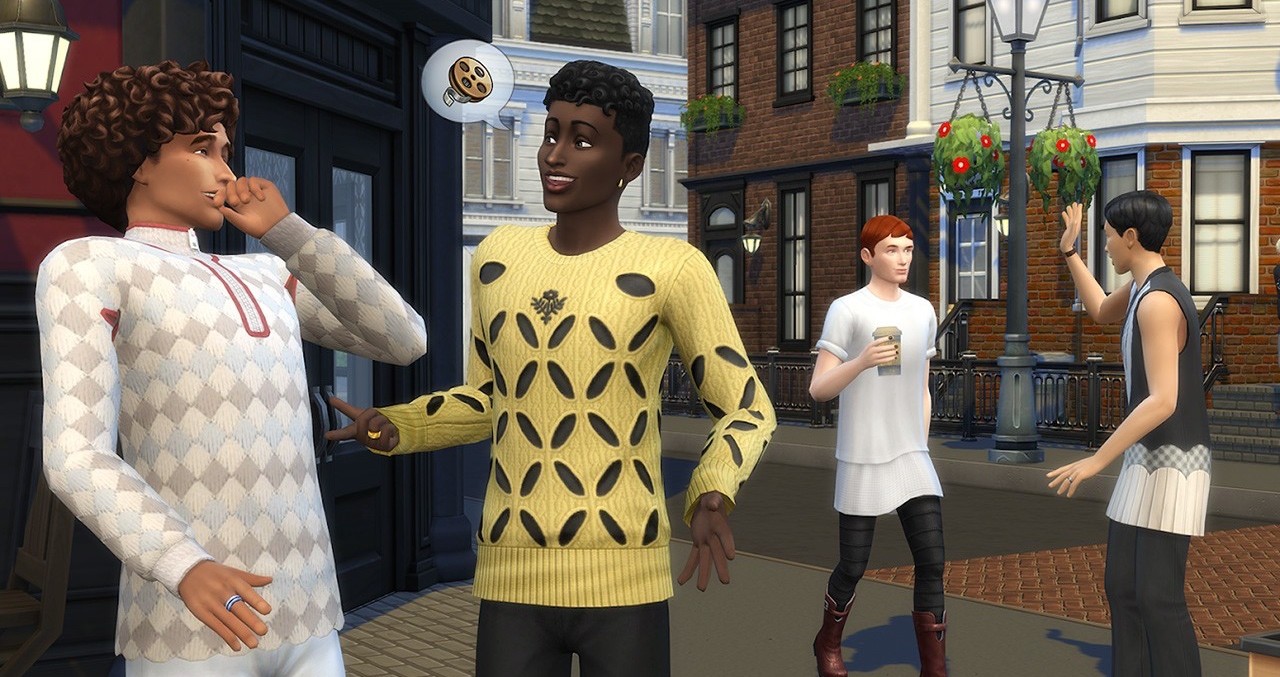 Image via The Sims

The brand has reunited with the popular gaming platform to launch new virtual outfits, as well as an interactive experience in Fornite's Creative Mode, called Jumpman Zone. There, gamers can go on a scavenger hunt to discover Air Jordan 11 'Cool Grey' artifacts, complete Trickshot Challenges and unlock Jumpman-inspired MVP areas. 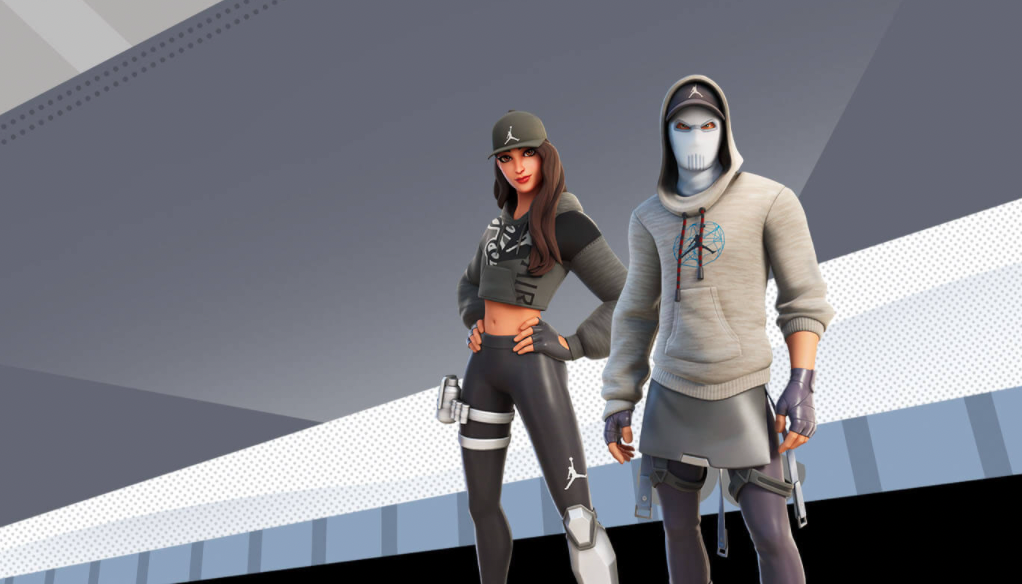 The Kering-owned brand previously collaborated with Fortnite and has now created a dedicated metaverse team. The allocated unit will work exclusively on exploring marketing and commerce opportunities in the space. Speaking about digital fashion, CEO Cédric Charbit said, "the use-ability is the point that's missing, but that's making gigantic steps every day." 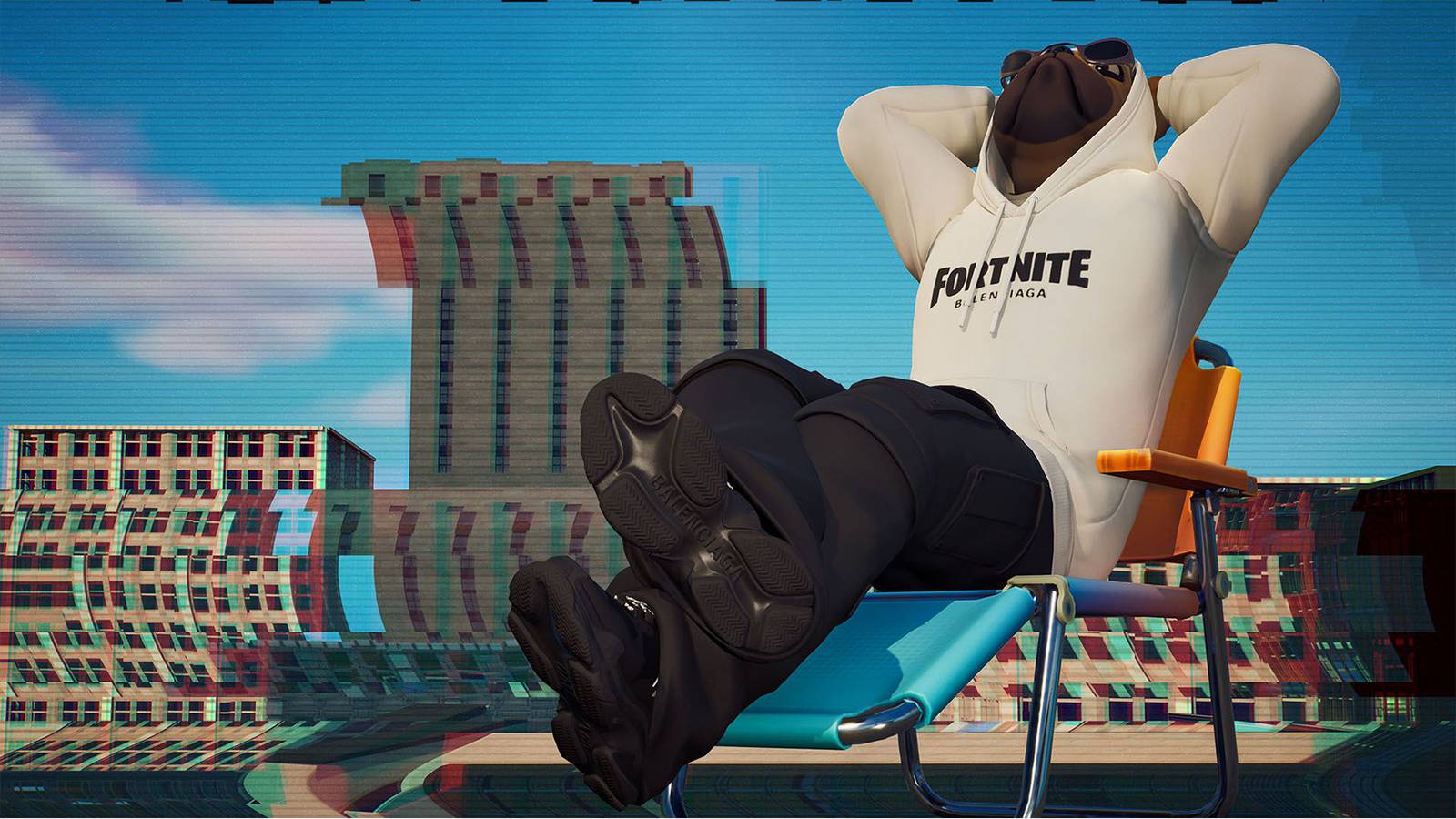 The international fashion group, which owns brands such as Diesel and Maison Margiela, has created a new business unit called Brave Virtual Xperience (BVX), which will support all of its brands in gaming and metaverse industries. 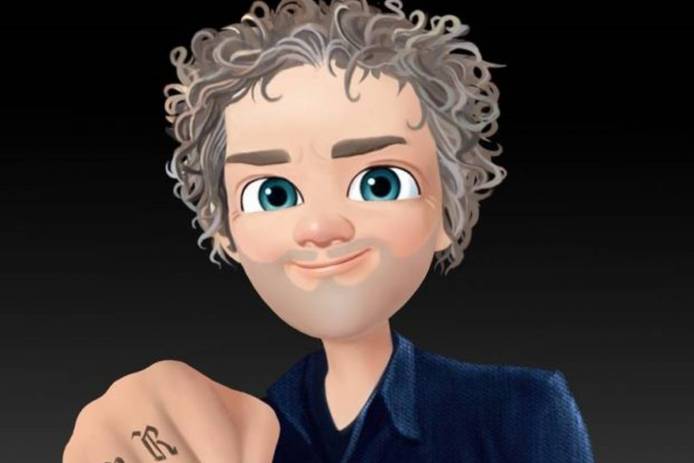 Image via The OTB Group

The BFC launched its first-ever Fashion Award for Metaverse Design exclusively with Roblox and crowned its first winner, cSapphire, who runs an in-game clothing store. The award was presented at a virtual ceremony by an avatar of Gucci's Alessandro Michele. 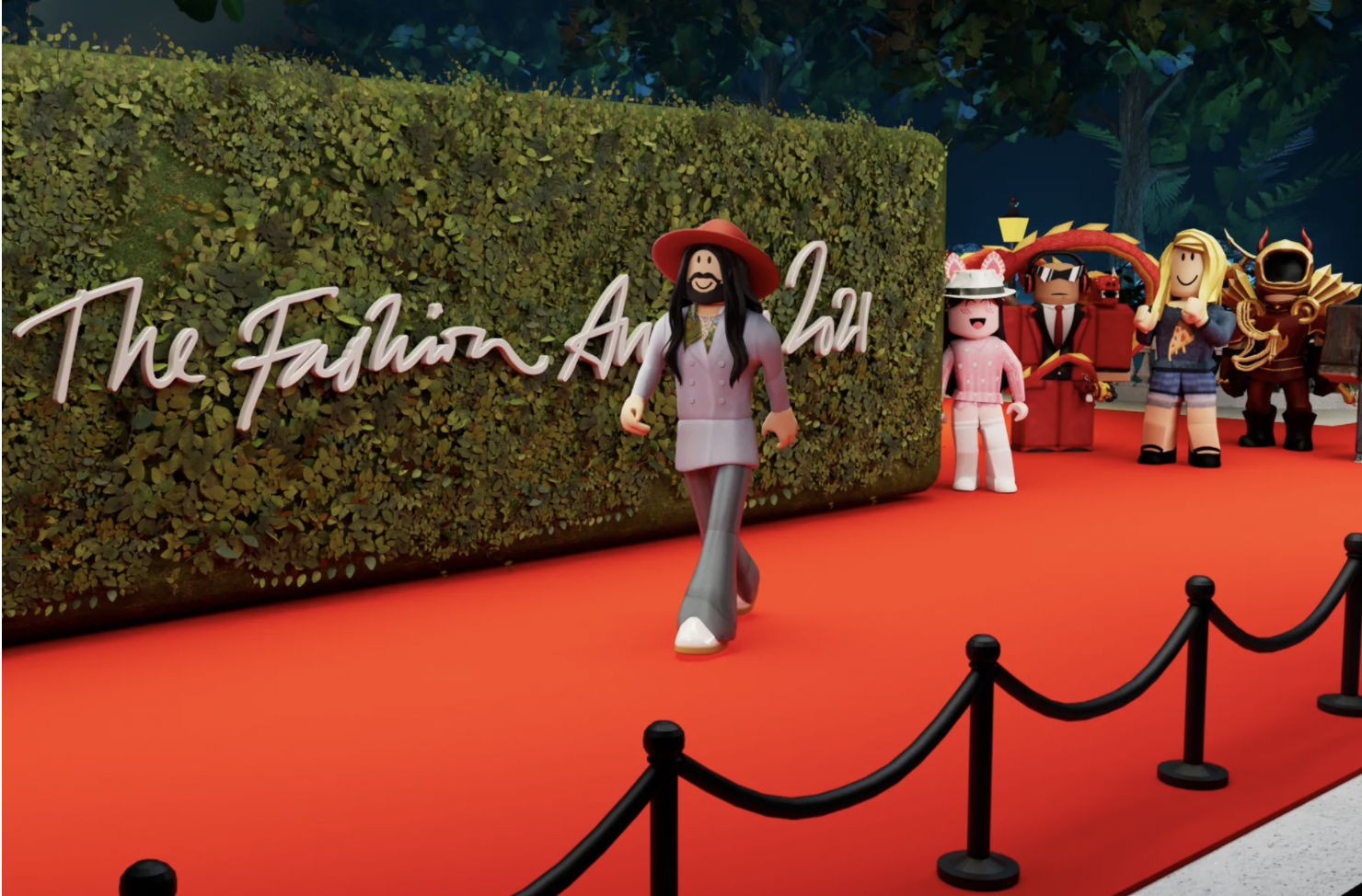 Image via The BFC

Dubbed Demo VR, the brand has created advanced virtual reality technology that enables customers to test out products, such as its hairdryer and Airwrap styler, in the comfort of their own home using an Oculus headset. 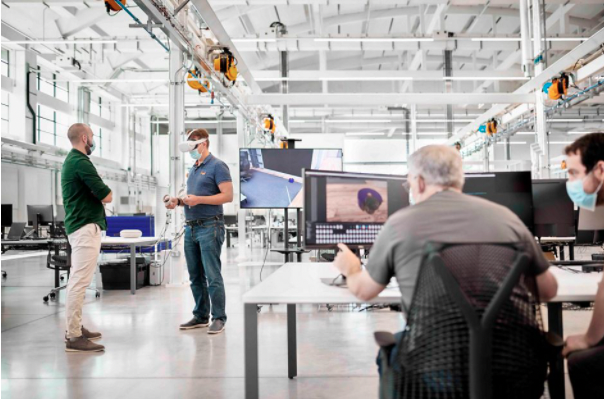 A regular on Animal Crossing, 11 pieces from its vegan Co-Exist Story collection have been recreated in virtual form to be showcased at the in-game fashion show. The retailers Looop Island has been remodeled to reflect the vegan values of the collection, banning fishing and hunting and offering vegan food at the island's restaurant. Gamers can also virtually download the clothes at the Able Sisters shop. 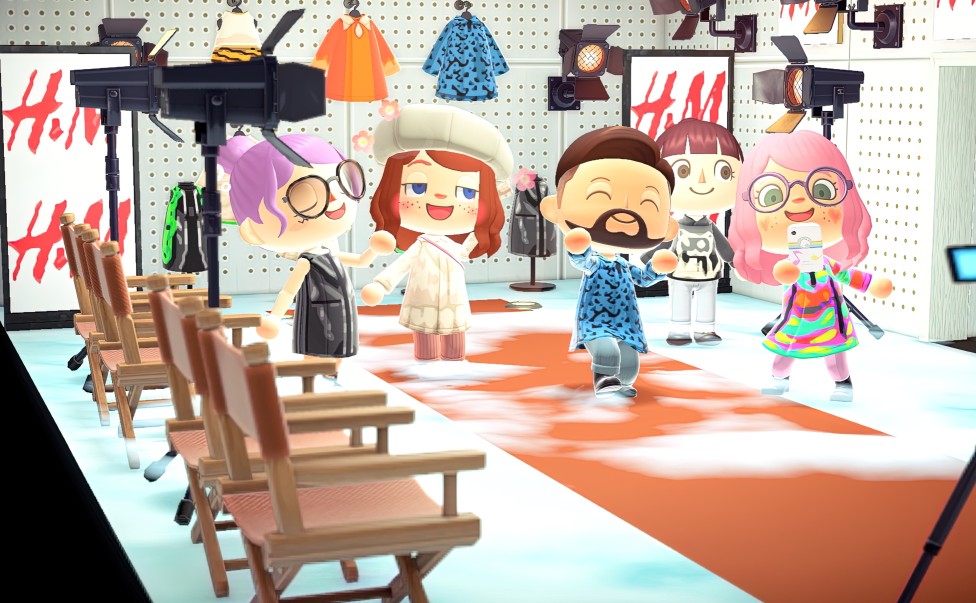 The majority of the metaverse's influences have come from gaming. Earlier this year, the platform began hosting in-game concerts for artists like Marshmello and Ariana Grande. Users can interact with environments in the game while listening to the show. More recently, Fortnite furthered its plans for the metaverse with "Party Worlds", new 3D spaces designed solely for players to hang out and socialize with friends.

Another major gaming platform, Roblox has seen the most collaborations with the fashion world so far, In November, Nike announced its partnership with the platform to create a free virtual playspace called Nikeland. Plus, Gucci curated the Gucci Garden in May to sell limited-edition digital clothing and, in September, Vans created an interactive store where users can customize sneakers and attend virtual concerts. 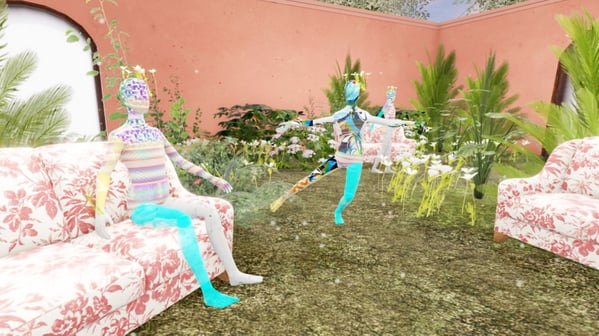 In October, Facebook announced it was changing its name to Meta, in order to "bring the metaverse to life." The company purchased VR company Oculus in 2014, signaling the start of its investment in the virtual space. At its Connect 2021 keynote, the company unveiled Horizon Home, its early version for a home base in the metaverse that users can join using their Oculus Quest headset. Meta also outlined plans for the metaverse to encompass work, entertainment and everything in-between - developing Quest for Business, which will fully launch in 2023.

Meta's rival has also been investing in immersive spaces, with a current emphasis on the workplace. The company most recently announced Mesh for Microsoft Teams as its gateway into the metaverse, a feature that allows people in different locations to join collaborative holographic experiences with the tools of Microsoft Teams. Users can join a Teams meeting as a customized avatar of themselves and build immersive spaces to meet and collaborate.

The metaverse provides an opportunity for people to showcase their Non-Fungible Tokens (NFTs) purchased in the digital world. In the future, we are likely to see consumers wearing digital clothing items they have bought in the metaverse - either in games or social spaces - as their avatar becomes more heavily linked to self-identity. Digital marketplace THE DEMATERIALISED enables customers to purchase digital fashion assets as NFTs that they can currently port into selected games, including Sansar, VR CHAT and Decentraland. 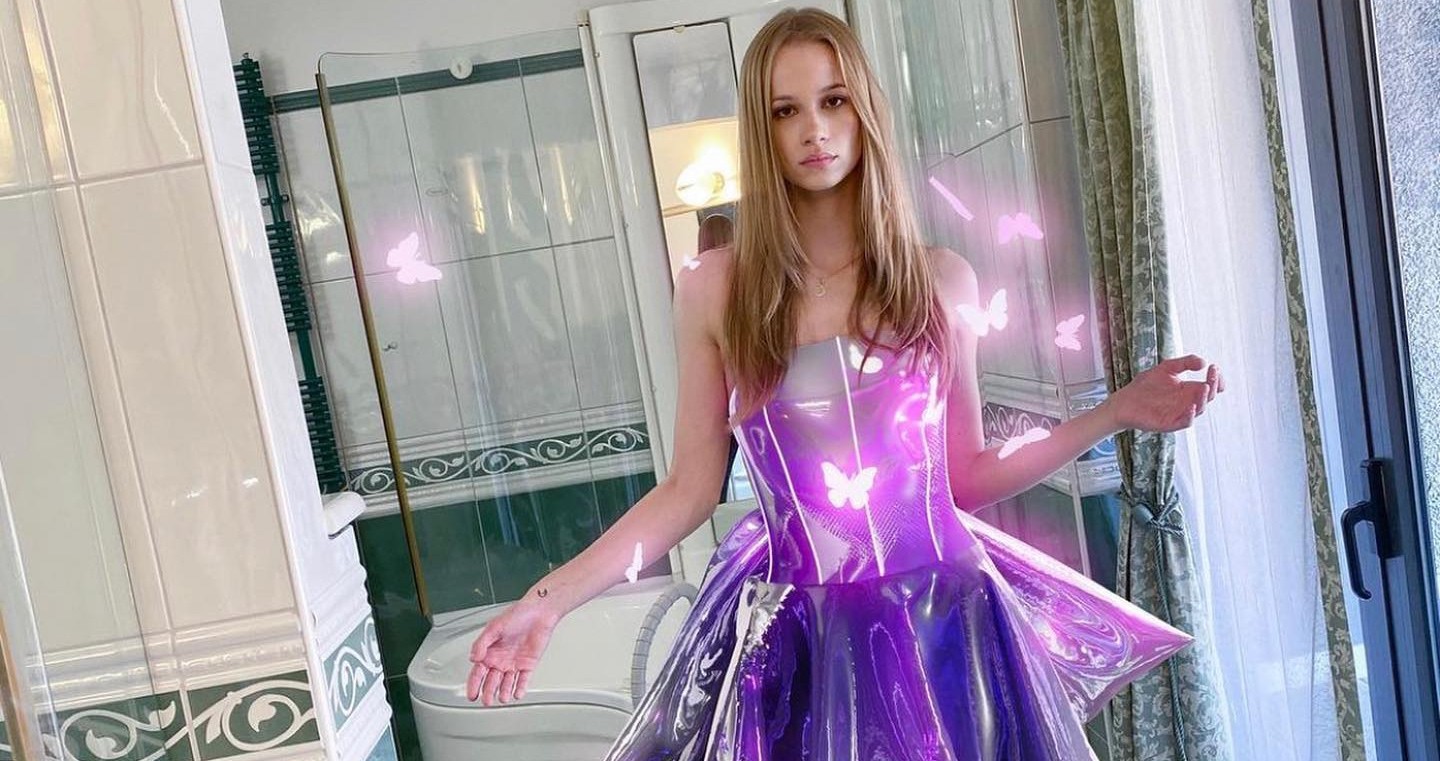 As it stands, the metaverse is currently inaccessible for many consumers as it often requires a VR headset for entry. The technology is also still under development and has a long way to go before replicating real life. Mark Zuckerberg estimates it could take five to 10 years before the central ideas of the metaverse become mainstream. However, aspects of the metaverse that currently exist, such as interactive games and avatars, can be utilized by brands through collaborations or by developing their own virtual worlds.

Want to stay up-to-date on all the latest news and analysis? Sign up to our weekly Insider Briefing.

Intimates Stories: Looking Back at the First Wave of Selling Online

Looking back on the successes and lessons learned from one of the world's first online lingerie retailers.