Breaking down the trickle down effect of Brexit to pricing across the UK and EU regions, and the direction retailers should consider. 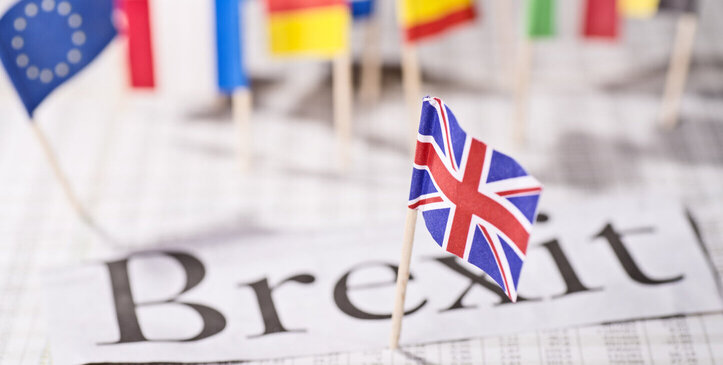 As Brexit brings changes to business practices and procedures for retail operators, what are the changes across pricing between regions and categories?

We boil down pricing and analyze YoY differences to illustrate Brexit's impact, identifying shifts in pricing at retailers operating across multiple regions and providing direction on what price points work per category, per region.

Reach out to one of our retail specialists to see how powerful retail data can be for your business.

• EDITED data shows a heightened discrepancy in pricing skewed towards the home country of retailers. However, this figure is small enough that it doesn't impact the most populated pricing buckets of products at a mass market level.

• Analyzing retailers operating across regions, tops and outerwear are selling out within the same price band in EU countries and the same figures in pounds in the UK, which exchanges as a slightly lower value. We identify footwear and bottoms as categories where there's more overt differences and opportunity to adjust pricing per region.

• In the UK, price bottoms at a higher £40-50 and £50-60; these buckets are outpacing other regions. Within footwear, the most successful price across all EU regions is €30-40. In the UK market, £10-30 and £80-90 is resonating the most with consumers. Ensure to build out options within these price ranges.

Analyzing the average advertised full prices of quintessentially British brands operating online in their home country and across Europe reveals a YoY uptick across nearly all examples. As we mentioned last August, luxury brands are hiking prices to absorb raw material costs and COVID-related losses, explaining the discrepancy between the average prices at Burberry this year compared to last. Boohoo had its most notable price rise in the European market at an average of €3.41 compared to its home site at £1.01. Marks & Spencer saw an average increase by £1.01 in the UK, while prices were relatively on par YoY in the EU.

Mango's European sites maintained price points YoY, which were bumped up by almost £2.00 in the UK. Vero Moda's UK site had a YoY discrepancy of nearly £0.60, yet in the EU prices are €1.06 cheaper than in 2020. Mimicking the UK-based analysis, the luxury brand registered the most considerable YoY variance across both markets. However, British consumers are paying more for Prada - an average of £149.29 higher than last year compared to those in the EU, where products are only €82.82 more expensive YoY.

We can track the trajectory of the average price of EU-based mass market brands in the UK since the start of the year when Brexit first came into effect. From the third week of 2021 prices were already higher than 2020, a trend that has continued to hold each week.

While this increase may be minimal, it's essential for retailers on both sides of the Channel to monitor how pricing translates in each region to adjust their assortments accordingly.

As new season arrivals from EU-based brands continue to drop on their UK sites, there are some noticeable price increases at major players. & Other Stories' new styles landing since the start of the year are 3.4% more expensive than last year, Esprit is up 2.8% and Massimo Dutti up 2.6%.

Tops between the £/€10-£/€30 mark equal most new products selling through at full price. However, there's opportunity for all regions to push harder into upper price brackets, given the popularity of tops selling out between £/€30 - £/€40. Invest in antibacterial/viral fabric technology, especially for garments worn when working up a sweat. 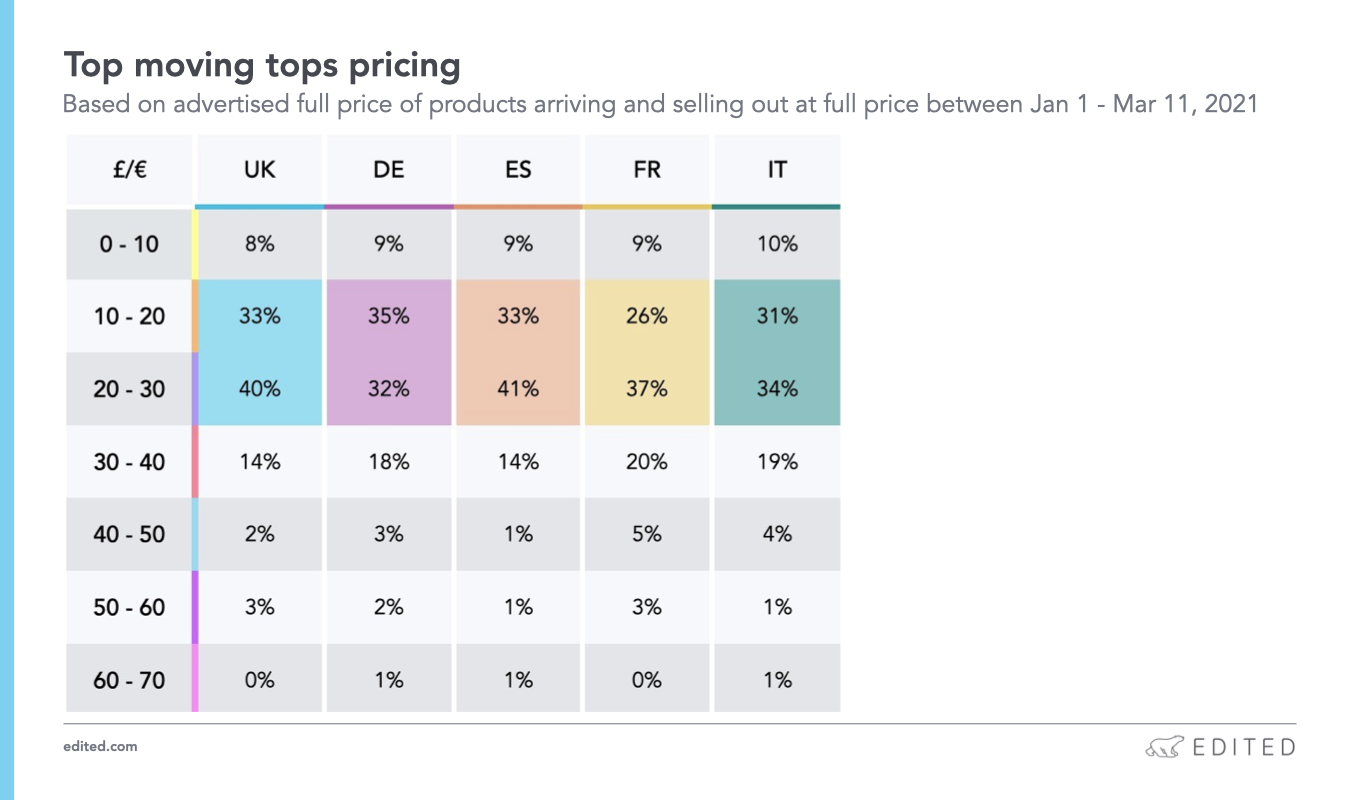 The most successful styles in the UK are in the £10-30 bracket while the EU are able to sell bottoms more successfully between €20-40. More products in the UK are selling out between £40-50 than in any other region, highlighting an opportunity for brands to extend their pricing architecture for more tailored or dressy items, which will challenge demand for sweats ahead of June 21st end of restriction celebrations. 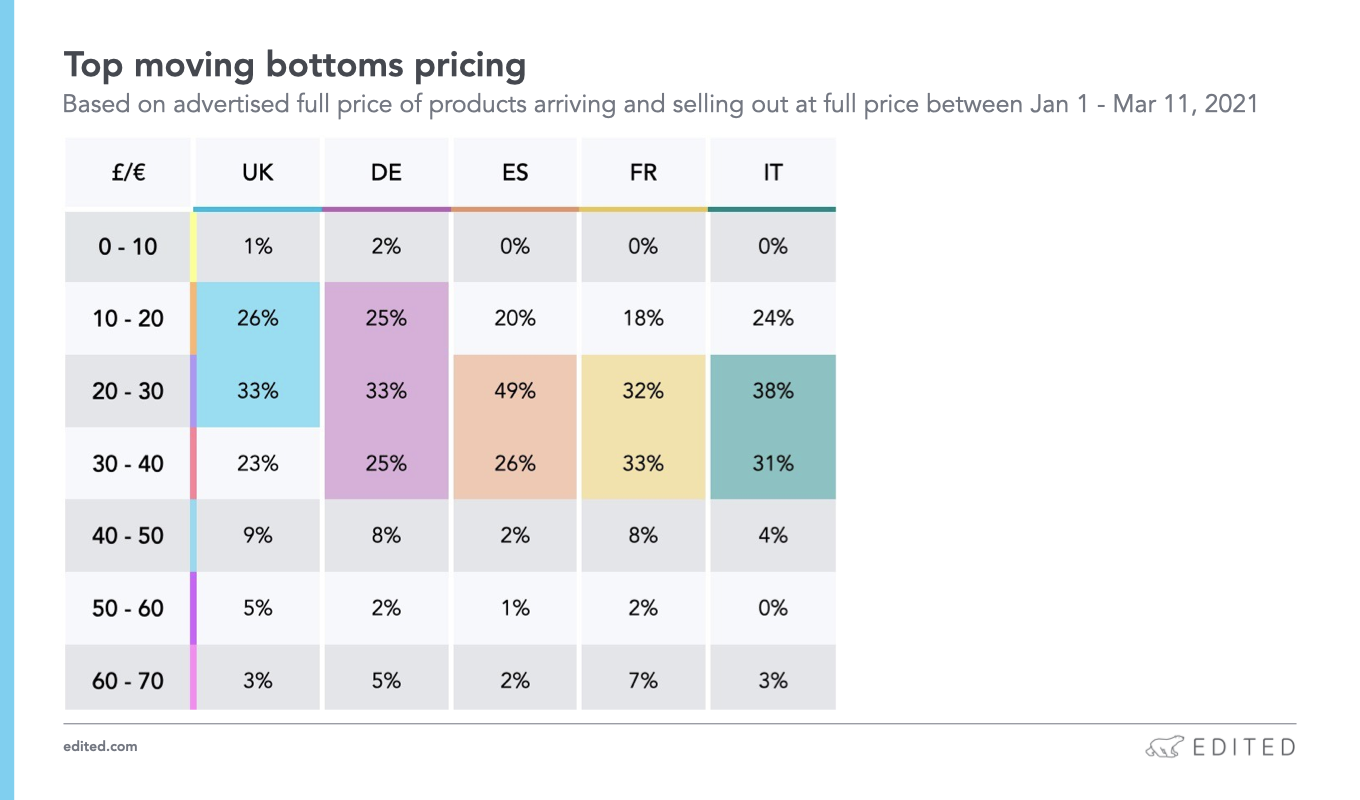 The most successful outerwear items across the mass market mainly sit between £/€30-50. The UK and Spain have the highest demand for more accessible pricing options with 14% and 15% of new sell outs between £/€20-30 respectively. Also, 10% of UK sell outs are between £90-100, allowing for more technical or quality pieces that can fetch a higher price point to be bought into. 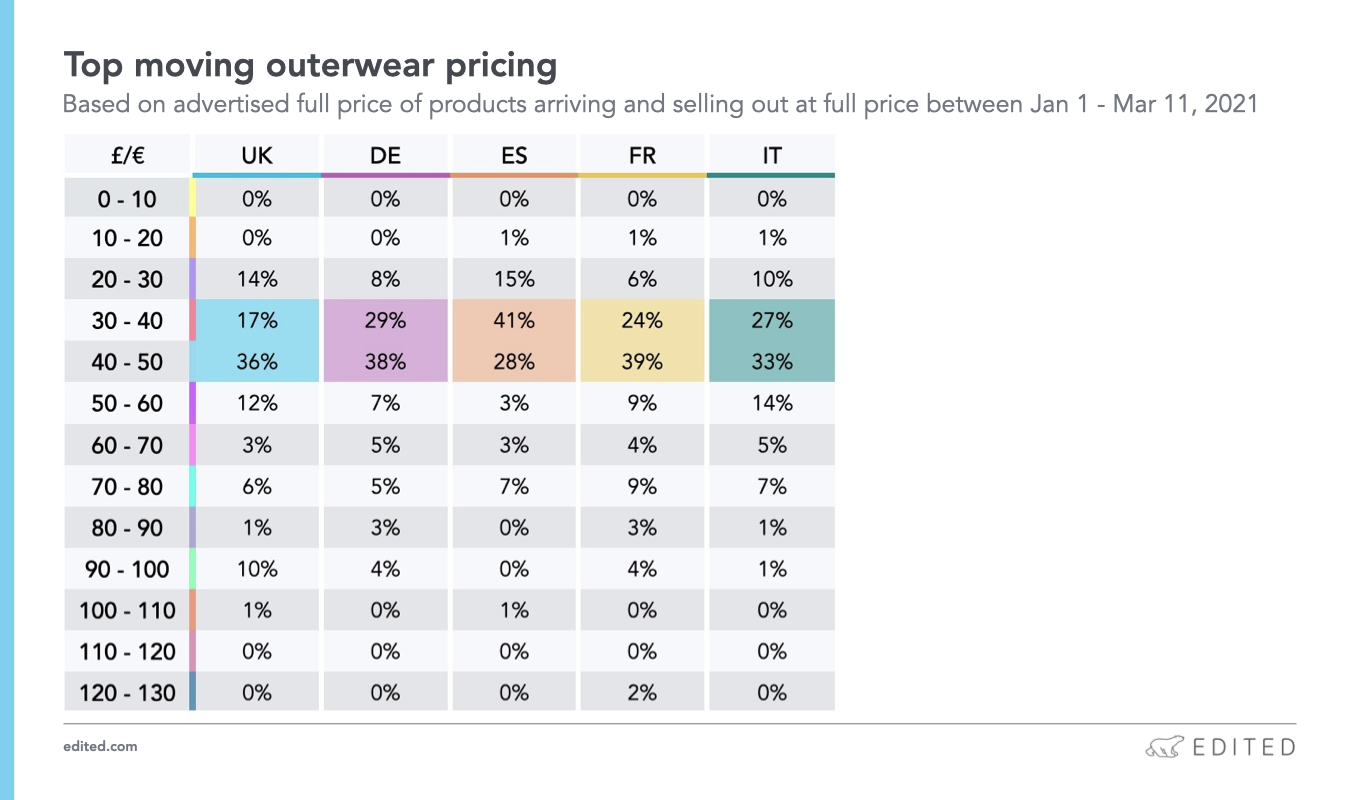 This category has the most variables in successful price points across regions. Footwear ranged between €120-130 in Italy saw just as much success as options advertised for half the price with demand for this higher bracket in other regions too. €30-50 is Germany's sweet spot and €30-50 is Spain and France's while there is interest in the €80-90 interval at the latter. The UK dominates the lower end of the spectrum, yet there is opportunity here in the £80-90 range too. 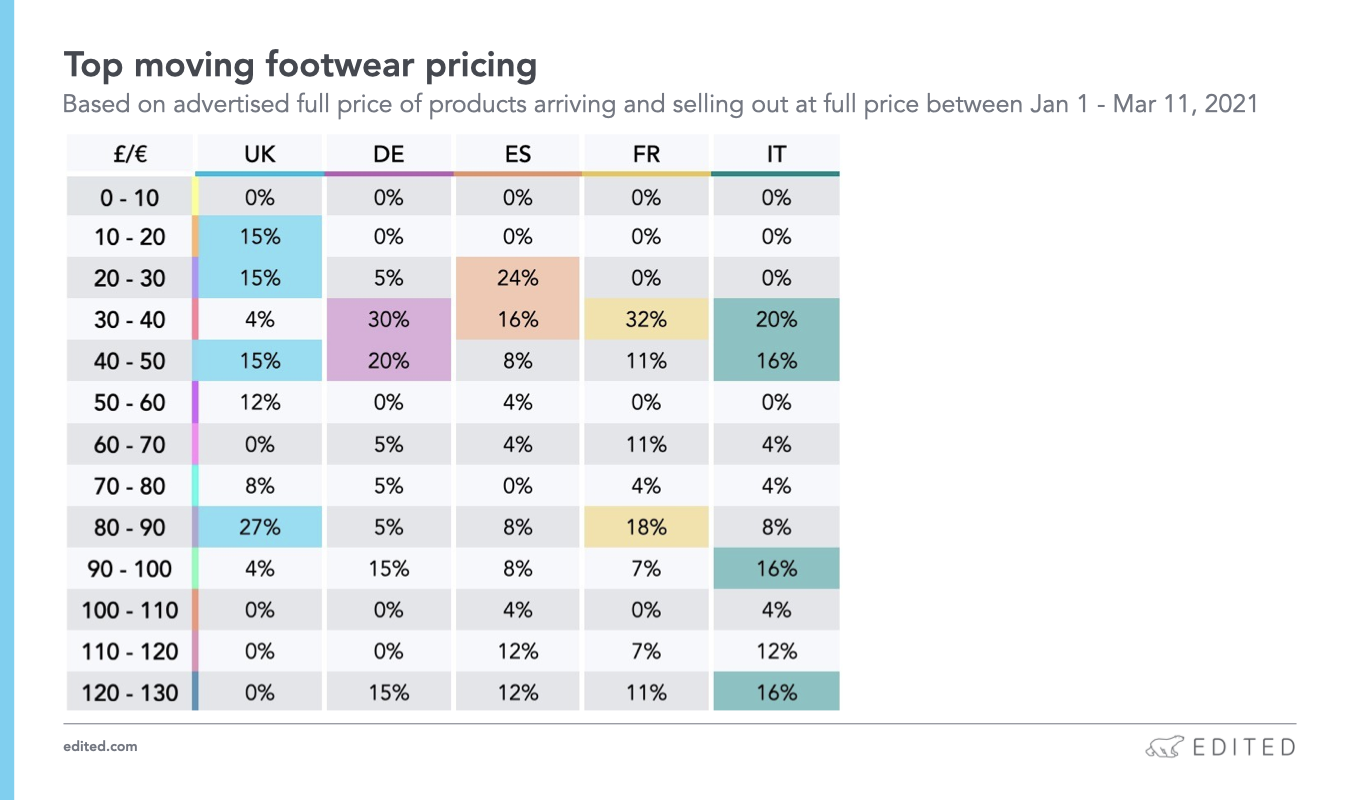 The most explicit reference to Brexit was at COS. Between January 13th-17th, free shipping on all orders was to compensate for Brexit delivery delays. Though from December 23rd through to January 10th, it was marked as a COVID delay. This then became simply free shipping from January 20th until the end of February to encourage spend. Meanwhile, this free shipping banner was missing from Italian emails, but a February 3rd email in the region boasted "fast shipping," which was not mentioned in UK messaging.

Massimo Dutti has one of the least consistent approaches across countries with £100 minimum spend in the UK and €80 in home country Spain, while €3.95 gives French shoppers a selection of pick-up points if the order value is upwards of €50.

& Other Stories has the same banner displaying the minimum spend per currency for free shipping. While all others have remained steady, since Brexit the pound has fluctuated - it varies between £70 and £90.

United Colors of Benetton hadn't featured delivery information banners since the height of lockdown in UK communications. Back in April 2020 there was free shipping on orders above £45, and no minimum spend through May into June - featured at the foot of the email. Free shipping on orders over £40 was introduced over Christmas and has remained post-Brexit as a way to reassure and encourage shoppers - this is positioned at the header of emails.