The need for gender fluidity in fashion beyond Pride

There are more unisex products available in mainstream fashion than ever before. We present the data findings in this space alongside the brands and influencers disrupting gender norms.

Amongst the flurry of rainbow-themed merch dropping ahead of Pride, products advertised as "unisex" or "genderless" were popular across promotions. But with gender fluidity yet to be fully integrated into the fashion industry, are these long-overdue gestures for inclusivity or tokenistic attempts at wokeness?

From androgynous influences on the runway to mass market retailers running “borrowed from the boys” clothing edits for women, the blurring lines of genders has been prominent in fashion for years. The unisex space is a fully realized market, yet that doesn’t mean it’s all-encompassing.

Currently, retailers pitch shapeless and oversized garments as gender-inclusive, which according to Wren Sanders, “overlooks trans people who wear skirts and suits to affirm their identities.” Thereby ignoring the difference between gender-neutral and gender-fluid identity. With the increasing awareness of and sensitivity to the experiences of the trans and gender non-conforming (trans&gnc) communities, this is another area of the fashion industry that needs improvement.

Ahead of Pride, notable retailers have launched capsule ranges advertised as “genderless” or “unisex,” propelling the market to new heights. We present the data findings of what this space currently looks like, the brands catering to it all-year-round and the influencers shattering gender norms.

Reach out for a demo on how retailers are approaching sensitive issues such as gender fluidity and other changes in the market.

It’s easy to see why this is an area of focus. According to the Phluid Project, 56% of Gen Z consumers shop outside of their assigned gendered area. Factoring in this cohort’s $143 billion spending power and the growth of the savvy consumer demanding diversity in fashion, it’s never been more timely for brands to promote an inclusive message with non-binary merchandise across all areas.

But how inclusive is this market really? Despite the word “unisex” appearing dated in comparison to “genderless” and “gender-neutral,” the bulk of products online at mass and luxury brands are described with the former term, while the uses of “gender-fluid” or “gender-inclusive” are scarce.

Following the events of last year, the fashion industry experienced a diversity awakening. Genderless products have spiked at mainstream retailers by 56% YoY. To prove it’s not just an after effect of COVID, we compared the number of products in stock now vs. pre-pandemic 2019 and spotted a 14% spike. And that’s just the tip of the iceberg. Brands with fluidity and inclusion ingrained in their inception avoid categorizing products by gender altogether.

For retailers using terminology that transcends genders, tops make up the majority of categories in stock in both regions.  T-shirts are the most invested style, equaling 51% and 47% of its parent category in the US and UK, respectively. Hoodies follow this at 21% in the US, versus sweatshirts at 17% in the UK. Genderless sweatpants also make up 36% of the bottoms category in the UK, while the US gives this product equal weighting with shorts at 33%. Overall, genderless outerwear is slightly more commonplace in the US market.

As imagined, this market leans towards more dark and muted tones. Outside of white and black, blues and greys are the strongest tones invested across both regions. Neutrals are more prevalent in the US, while the UK is more invested in greens and pinks.

To further the point that gender-neutral doesn’t always equal gender-inclusive, unisex products are predominantly graded in standard men’s sizing as the current psychology is women are more inclined to wear men’s clothing than vice versa. This mentality is still apparent in the fashion industry and proven through the product catering to this market. It is usually classified as either essentials, like jeans and tees, or sports and loungewear, which presents an opportunity to break down gender barriers through under indexed categories. Lingerie remains an untapped opportunity with those venturing in this space reaping the rewards, where gender-fluid label Les Girls Les Boys experienced a 400% YoY increase in underwear sales in 2020.

Emails communicating unisex styles ramped up in September 2020 when PacSun launched a gender-neutral shop. Gap Factory, Rue La La and Polarn O. Pyret also contributed to the rise, sending out more emails towards the end of 2020 than earlier in the year.

As of March 2021, 25% of TikTok active users are aged 10 to 19, with 22.4% aged 20 to 29. TikTok has propelled non-conforming gender stereotypes into the mainstream with the "pronoun check" recently going viral on the platform, highlighting the use of multiple pronoun variations.

Coined as "TikTok's Best Dressed Guy" by Vogue, creator Wisdom Kaye is a leader in this space with 5.8 million followers, where platform boots by Rick Owens and Telfar bags both make an appearance in his videos. Other creators such as  Jay Beech connect with his audience via gender-neutral, retro-inspired ensembles, while dresses and skirts are favored by Triple Minor.

More social media platforms are expanding their inclusive features. In May, Instagram launched a spot for users to add pronouns to their accounts. Pinterest also offers the option of nine pronouns for users to choose from and add to their profiles. 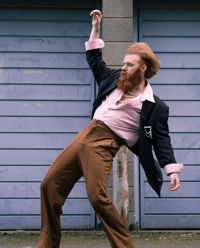 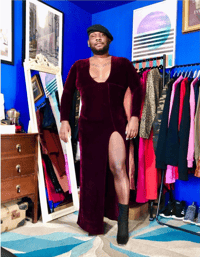 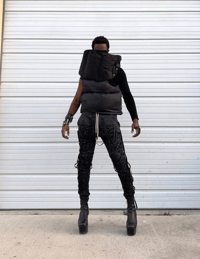 Celebrities are leaning in

In May 2021, Demi Lovato announced they are non-binary, changing their pronouns to they/them. The singer shared the news alongside the launch of their new podcast, 4D With Demi.

Celebrities including Lil Nas X and Kid Cudi have recently leveraged popular television shows to express their views on gender-conforming dressing. As a guest on the Jimmy Fallon show, Lil Nas X wore an oversized blazer from Virgil Abloh and a tartan skirt from Louis Vuitton, while Kid Cudi performed on SNL in a floral dress from Off-White - a tribute to Kurt Cobain. 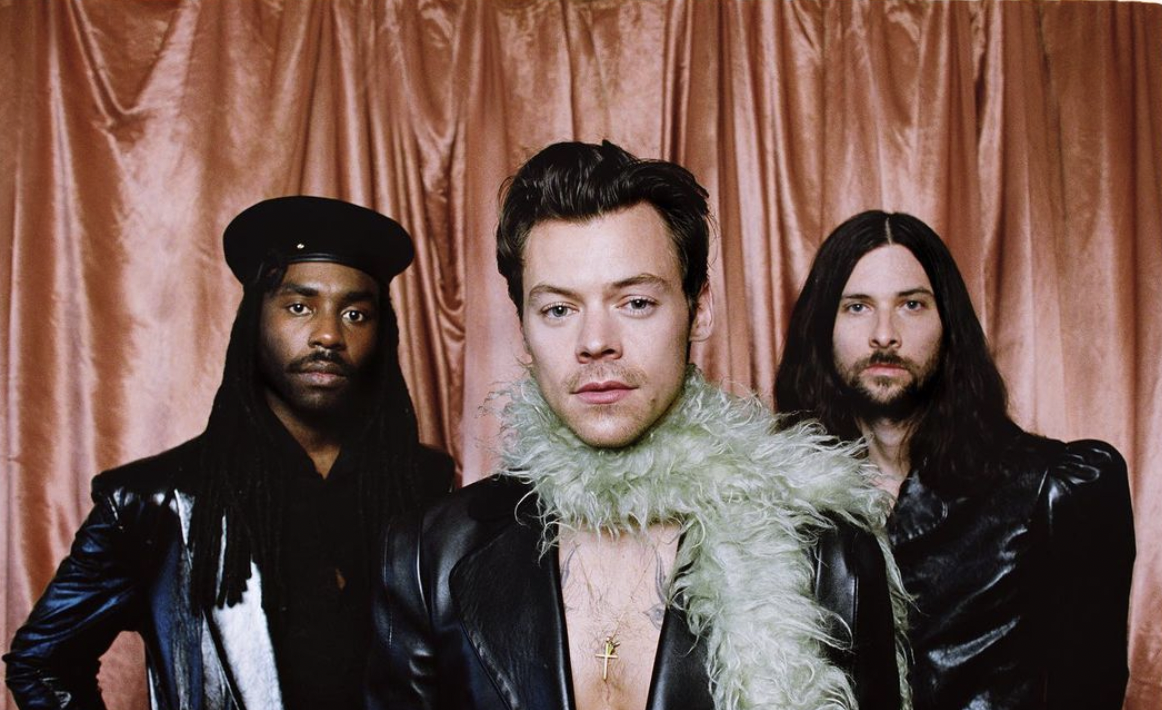 The Amsterdam-based streetwear brand and Tommy Hilfiger collaborated on a capsule inspired by Black unity and community, with the Pan-African flag as the focal point. The T-shirts, hoodies, sweatshirts, outerwear, jeans and baseball caps are available in adult and kid sizes.

The two teamed up to create a line of men's, women's and unisex elevated basics, including hoodies, long-sleeve tees, socks and accessories, available in sizes XS-XXL.

The retailer and the Fashion Scholarship Fund announced the winners of their Gender-Neutral Design Competition, Allegra Abrams and Oli Perez, who will produce a limited-edition unisex collection sold at PacSun later this year.

To target the Gen Z customer, the department store collaborated with Wildfang to offer a gender-fluid version of Nordstrom's teen private label, BP. In addition, sizes extend to 4X, with prices ranging from $12 for earrings to $89 for coveralls.

The Australian brand launched a collection featuring tracksuit pants, hoodies, jumpers and T-shirts. Products are attached to the slogan comfort for all and available in green, brown, black, white and grey.

A chinese brand established by Liu Guangyao in 2018, embracing individuality and de-labeling through its motto, "NO GENDER.NO BORDER.”

A Black-owned business based in London, Cold Laundry offers modern and functional streetwear transcending genders with a focus on ethical sourcing and manufacturing at an affordable price point.

A New York based streetwear and lifestyle brand launched in 2015. Known for its edgy and playful approach to ready-to-wear and accessories, as well as high-profile collaborations with MAC, Macy’s, Urban Outfitters and more.

Peter Strateas and Mario-Luca Carlucci founded the brand in 2013 and defined it as deconstructed androgyny, producing modern luxury wardrobe staples.

Best known for its coveted vegan logo tote, the brand boasts both eco-friendly and inclusive credentials. It recently launched a follow up to its hyper-successful UGG collaboration. 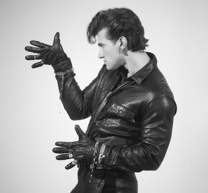 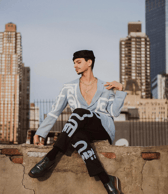 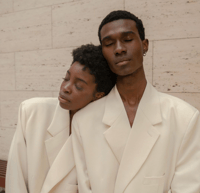 The end of traditional fashion culture

While the Fall 2021 womenswear runway shows were the most racially diverse season on record, representation across size, age and gender plummeted. According to the Fashion Spot’s diversity report, only 12 gender-diverse models walked in the Fall 2021 runway season versus  Spring 2021's total of 20. The recent runway showcased non-binary models Parker Kit Hill and Richie Shazam hired by Christian Cowan, transgender model Ariel Nicholson who walked for Chloé and Gabriela Hearst, alongside Daniela Santiago booked by Roberto Cavalli.

While brands are making strides to be more gender-inclusive, the microscope will be on their integrity going forward. How are they continuing this conversation and support in the future? Only time will tell, but what’s for certain is Gen Z’s collective $143 billion and unwavering loyalty will go to the businesses that pull up and champion inclusivity all year round.

75% of Gen Z consumers would end relationships with companies that run campaigns perceived as macho, racist, or homophobic. That makes it imperative for executives to give BIPOC, trans and queer voices a seat at the table, paving the way for a more diverse and inclusive industry from the top down. 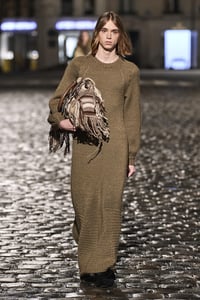 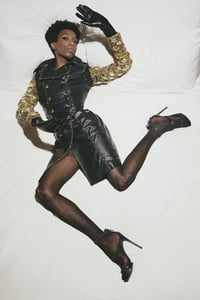 Enjoyed this? Sign up to our weekly Insider Briefing to get the latest industry insights and analysis.

Reflecting on the past quarter's hottest trends to help you trade more competitively throughout the year.