Singles' Day slowed down in China. How were Western retailers impacted?

For the first time on record, the planet's biggest shopping event failed to achieve double-digit growth. Here's how 11.11 unfolded across US and UK retailers.

Alibaba experienced its lowest-ever growth for Singles' Day of just 8.5% as the pressure from supply chain headwinds and a crackdown on China's tech firms took hold.

This was the first time the ecommerce juggernaut missed out on double-digit gains for its signature sale since the event's inception nine years ago. Despite this, customer spending across both Alibaba and JD.com platforms cracked a new record of $139 bln.

As the region called for curbs on excessive income and wealth earlier in the year, Alibaba eschewed its traditional Singles' Day marketing of live tracking and tallying every transaction made. Instead, it honed in on social responsibility, encouraging livestream viewers to click "like" to help the company raise funds for an elephant reserve in rural China.

This set the stage for a more toned-down Singles' Day for US and UK retailers. Read on as we give you the lowdown, backed as always by world-class data.

Want to measure the promotions your competitors took on Singles Day? Reach out for a demo to see EDITED’s discounting tools in action.

• US and UK retailers offered their most conservative reductions in two years. The average sitewide discount depth sat at 45% in the US and 38% in the UK.

• Deeper discounts didn't always equal greater sell outs. The products seeing the highest level of success at US retailers on Singles' Day sat within 70-80% off. Yet the second most popular promotion was 20-30% which was also the best performing offer in the UK.

• Patchy stock levels influenced retailers' strategies to pivot away from deep, sitewide reductions. Instead, there was a focus on offering discount codes via emails to reward loyal customers, which helped avoid slashing margins too heavily ahead of peak discount periods.

• Discounts and price point offers in multiples of 11 were favored in promotional material to customers, with 22% the most communicated reduction.

Across both regions, the sitewide offers at core mass market retailers were starkly lower than the past two years. This shift has been apparent across 2021 as retailers offset aggressive markdowns taken during the pandemic. For Singles' Day, US retailers continued to discount deeper than the UK, with an average advertised rate of 45%, which was a two-year low. Meanwhile, less than half the items available on the day of the event were advertised as reduced in this region.

The UK outpaced American retailers with the breadth of assortments marked down, yet this too was below pre-pandemic levels at 54%. Global supply chain bottlenecks have resulted in 15% fewer products available on the 11th across both regions vs. 2019. This indicates retailers were cautious of clearing too much ahead of Black Friday and the festive season and conscious of keeping margins intact. 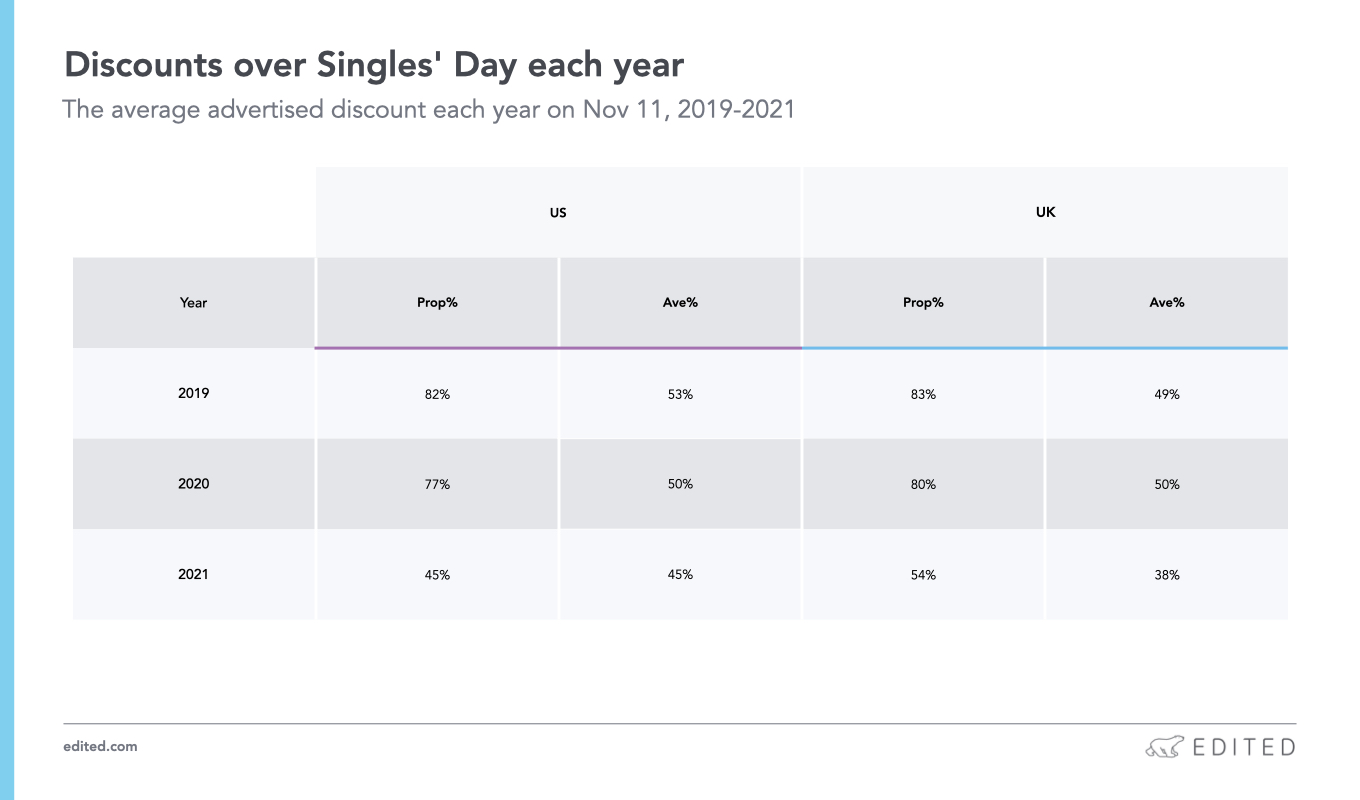 As Singles' Day becomes a more prominent event on US and UK retailers' calendars, sell outs have seen an upswing from 2019 with the majority SKU sell outs up 48% across both regions. Despite this, fewer options and lower reductions led to sell outs dropping YoY - down 7% in the US and 9% in the UK.

Deeper discounts resonated more with American consumers. The advertised promotional bracket housing the highest proportion of sell outs was between 70-80%. While UK retailers outpaced the US with products selling out at the steep discount thresholds of 50-60% and 60-70%, the most popular promotion was between 20-30%. 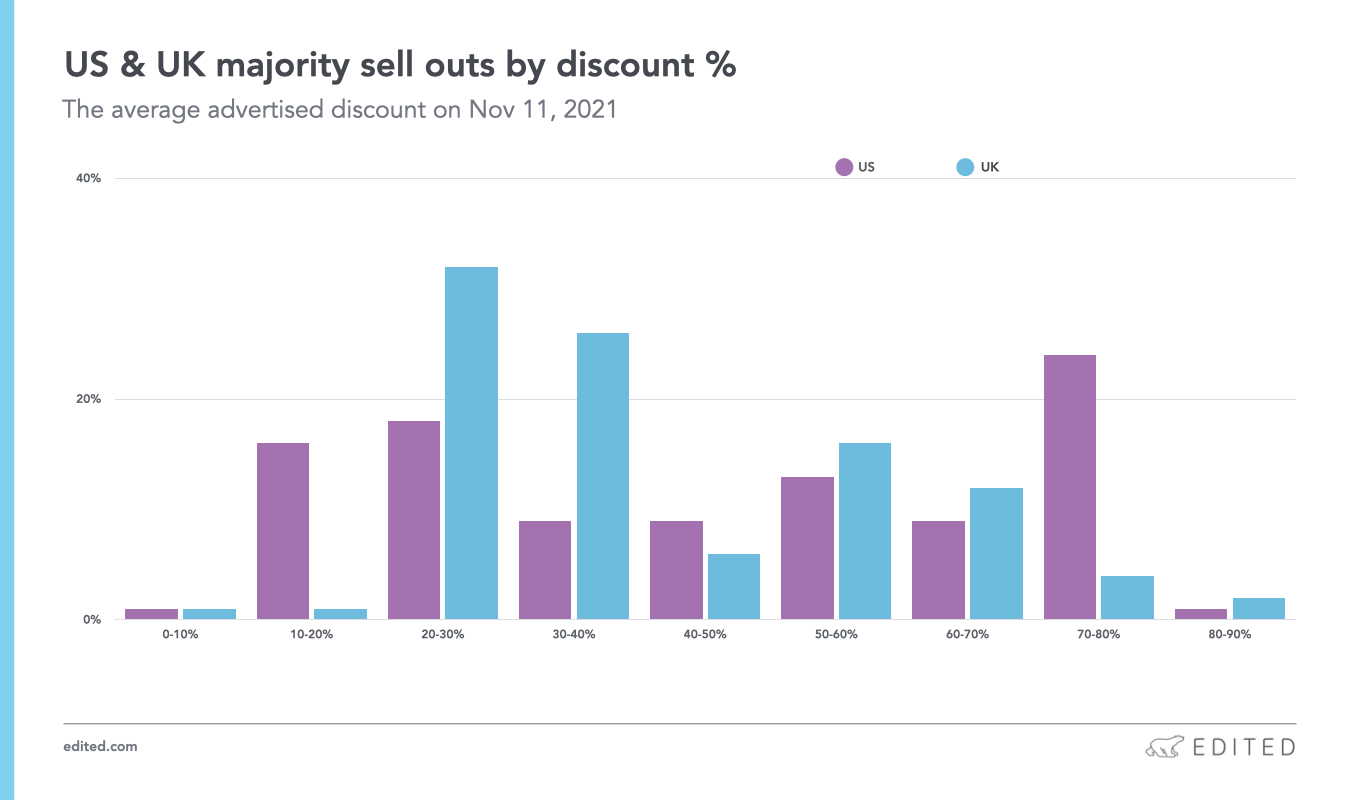 Tops and bottoms were the categories with the highest proportion of products advertised with a discount of 60% or more on Singles' Day for both regions. The UK reduced fewer of these styles than the US to more forcefully target dresses, all in ones, swimwear and product sets. Within tops, both regions used the event to mark down more formal styles at a deeper threshold, with blouses and shirts the most common product discounted. In bottoms, retailers cleared through shorts and skirts.

Retailers protected footwear from heavy reductions on the day. Only 1% of footwear in the UK was advertised as reduced at 60% and upwards vs. the US, where it equaled 5% and what was marked down was predominantly sandals. Despite the "treat yourself" narrative woven throughout communications, self-care and comfort styles like sleepwear and underwear weren't attached to heavy reductions in either region, indicating they don't require such drastic promotions to sell though. 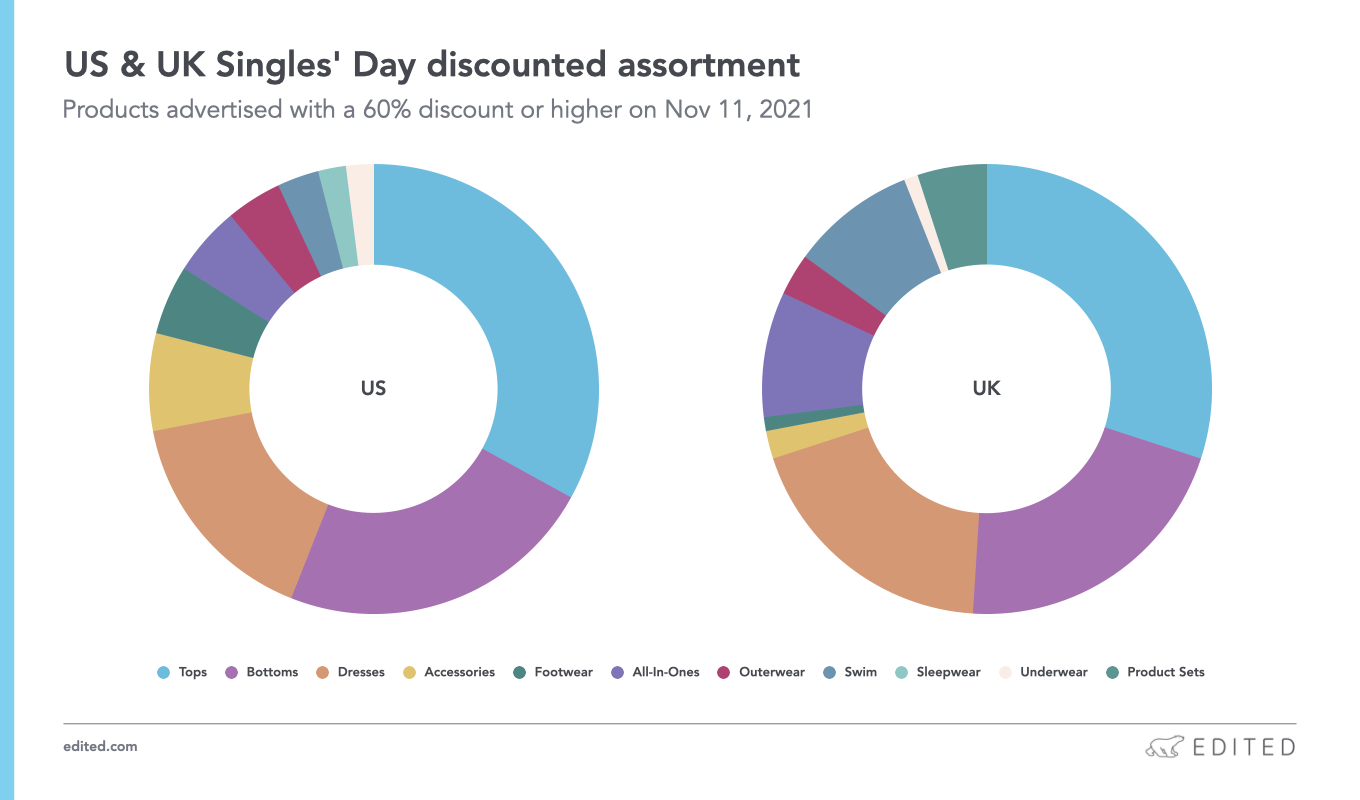 While not officially running over multiple days like last year, retailers still promoted extended offers. Farfetch, Levi's and Beauty Bay offered discounts via emails on November 8th, with G-Star following on the 9th. Look Fantastic announced the event as a Singles' Week and Fabletics blurred all November discount days into Cyber Month sales. Multiples of 11 were favored as communicated discounts in emails, with 22% reductions the most prevalent. A similar strategy was adopted for price points, with $1.11 Jibbitz™ shoe charms at Crocs, $11 select styles at I Saw It First, $11 Havaianas and $111 off at Tradsey. 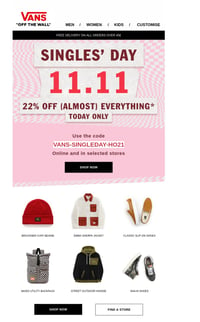 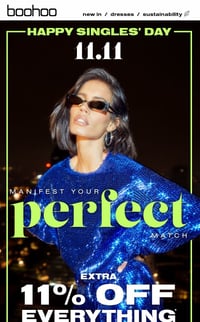 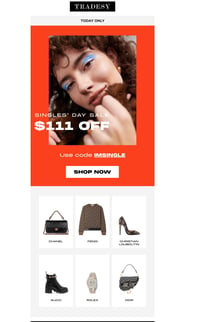 Acting as an antithesis to Valentine's Day, the theme of celebrating and loving oneself was widespread throughout retailer communications. This year was no different, though there were also juxtaposing messages more inclusive of everyone regardless of relationship status. Dsquared2 promoted offers for "whether you're solo or settled", while Lindex dubbed the event "Everyone's Day."The event served as an opportunity to cut through the noise of mass promotions during this discount-laden period by injecting humor into their emails. ASOS used the discount code BAESOS, while boohooMAN included the subject line "who said 11s don't exist?" 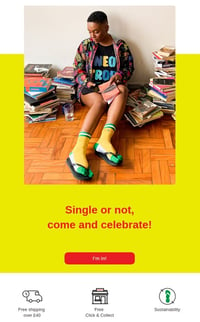 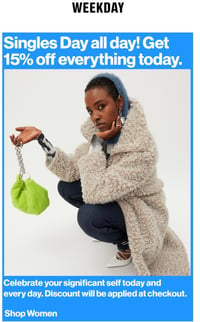 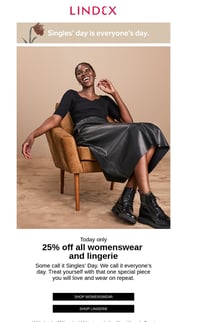 Enjoyed this report? Sign up for our weekly Insider Briefing for our upcoming Black Friday data analysis.

Spring/Summer 2022 – What EDITED Got Right & Wrong

How trends, discounts and pricing insights were proven and disproven.

The Early Days of a Retail Empire or My Life with Mickey Drexler.