How retailers are waking up to racial injustice and their responses

In response to the death of George Floyd and worldwide protests, find out how brands are taking steps to address racial injustice across its business and industries to improve diversity and provide equal opportunities.

Following the tragic death of George Floyd and the resulting worldwide protests and donations and messages supporting Black Lives Matter, we’ve kept track of the changes brands and retailers pledge to make in improving diversity and providing equal opportunities across their organizations.

Emails mentioning Martin Luther King Day more than doubled YoY on the actual holiday. When comparing the number of emails sent ahead of the event through January 2020 vs. 2021, there was a 65% increase – thanks to retailers communicating this year who didn’t in 2020, most notably West Elm, Blue Mercury and Victoria’s Secret.

Retailers like Alo featured a quote from Dr. King, emphasizing that unity goes hand-in-hand with justice, and for that, we all need to do our part. Fighting for equality is his legacy and it is our responsibility to bring it to fruition.

Some retailers took this opportunity to promote discounts up to 25% off. However, it was more popular to see retailers partner with civil rights organizations like the NAACP as a way retailers could give back in celebration of this holiday.

Whether sharing company resources on D&I commitments internally and with communities or collaborating on a collection to benefit local non-profits that promote non-violence, retailers expressed how they are involved more than ever.

More retailers communicated Juneteenth this year than last year. Now that the holiday is federally recognized, retailers should consider how they want to message their support and acknowledgment next year. Most emails this year highlighted donation amounts and partnerships with the likes of the NAACP, The Steve Fund, Fair Fight, American Civil Liberties Union and more. Brands acknowledged the past and shared their commitment to continued education by using the terms "reflection" and "recognition." 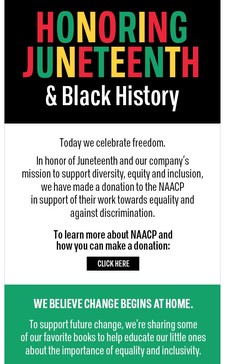 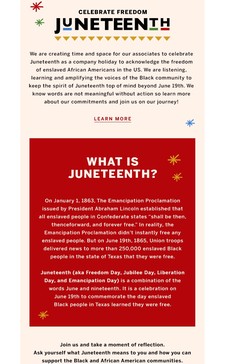 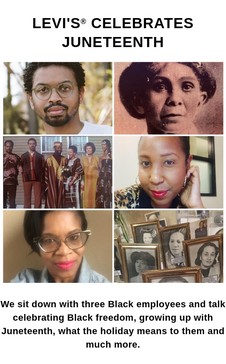 Log in with your EDITED account for an analysis on the specific actions of various beauty, fashion and other retail brands who made commitments to D&I last June and what they’ve done since then.

PULL UP OR SHUT UP

Launched by Sharon Chuter, founder and CEO of UOMA Beauty, the Instagram account has gained 104k followers since its first post on June 3rd. The campaign challenges brands that had previously made a statement of support to make public the number of Black people in their organization, excluding field/retail store level employees and customer service, as well as the number of Black people in leadership roles. After being called out to #PullUpOrShutUp, Monki addressed in a post citing, “laws in place in Sweden (which is where Monki HQ is)”, as to why they couldn’t participate.

Created by Aurora James, the campaign asks stores to commit a minimum of 15% of their shelf spaces to Black-owned businesses. The 15% is representative of the proportion of the US population that is Black. Sephora responded, “we recognize how important it is to represent Black businesses and communities, and we must do better. So, we’re starting now”. Other retailers taking the pledge include ban.do, Rent The Runway, Violet Grey, Loho Bride, Threads, WeWoreWhat and MATCHESFASHION have committed to publish an annual breakdown of the designers they support by ethnic background, with the first disclosure by the end of August.

Emails were scattered throughout the month. Overall, Gap led the pack, sending out the most emails, highlighting its alliance with the Black Lives Matter movement. Boots and River Island also sent several emails, messaging direction on how to get involved in Black History Month and featuring Black-founded brands. Some brands offered special deals during the month to promote Black-founded businesses. Others took a more intimate approach, highlighting inspiring employees and historical figures who embody fighting for equal rights.

Retailers like ASOS did not leverage emails or Instagram to feature Black History Month content. Instead, they dedicated a page on their website as a more permanent way to express the month’s significance, selecting six Black employees to describe what this month means to them.

Outside of retail & individual initiatives

Retailers state they must do better

Headed by the bold statement ‘I’ve failed’, Yael Aflalo, Founder of Reformation, posted a personal apology for racist behavior on the retailer’s Instagram in response to criticism from past employees. Noah Clothing also shared their mistakes saying, “our team has let us know that we simply have not done enough”.

Alongside financial pledges one of the most discussed steps being made by retailers is the development of Diversity and Inclusion committees and boards. Other actions stated include: having more Black representation in management and leadership; collaborating more with Black creators, models and Black brands; and implementing unconscious bias training, training on racism, equality and social injustice across organizations. Some retailers are also asking consumers what they think they could be doing better. In the US, Adidas has pledged that 30% of all new jobs will be filled by Black and Latinx people.

Financial pledges have been notable across Instagrams and retailers’ email communications. Retailers such as Same Swim, Araks and Staud are donating a portion of profits. While Phillip Lim urges consumers to consider contributing to an anti-racism movement instead of shopping on their site, with organizations listed to donate to. In a similar vein, Ganni stopped taking orders and urged customers to donate instead.

Start at the top

As of July 15th, less than 2% of the 50 largest companies’ top executives are Black. Statements made by retailers in response to George Floyd’s death were hopeful in changing that statistic, with the goals of increasing the percent of Black employees and diversifying talent through executive levels. As important as it is to have diversity in all aspects of a business, these executive leaders of color can monitor and prioritize internal changes while also acting as role models for the next generation.

Be continuously transparent with your support

It’s one thing to show your support during a moment of crisis or around significant calendar dates, and another to campaign for diversity and inclusion all year round. Embed this narrative of acknowledgment and change into your company’s foundation throughout the year by communicating progress towards accomplishing goals set back in June, highlighting events and people who inspire change and being transparent with company demographics. By doing so, consumers will be more loyal and trust your words of making strides towards bettering your company and the industry.

For more of the latest industry analysis, sign up to our weekly Insider Briefing.

Prime Day discounting reached an all-time high this year. Find out how US and UK strategies differed.